I'm constantly working on improving my dev setup as I find little annoyances I want fixed, or small improvements I can make to my workflow. I also love reading about other people's setups, learn new stuff and take what's relevant to me.

Why should you work on your dev setup?

Getting to know the vast ecosystem around Developer Experience made me more passionate about the open source community and led me ultimately to even build my own OSS project that helps other developers.

I believe that "optimizing" my setup sparked renewed interest in development for me. Working on a Developer Experience product could be my next passion.

And there are many companies that work on tools to help developers and non-developers alike that I might be interested in exploring as future job candidates. Companies that develop things like IDEs (replit, VSCode), or others that write an app launcher (Raycast), Calendar (Cron) or maybe a better tool for work messaging (Slack 😠).

Hopefully I gave you some motivation to work on your dev setup, but let's look at the more concrete reasoning.

Note that my setup is always evolving as I find better ways to do things.

Let's look at some of the concrete benefits of a good dev setup:

Sensory overload occurs when one or more of the body's senses experiences over-stimulation from the environment.

When I use my computer, I want every day tasks to happen without requiring me to think. That includes launching an app, writing an email, browsing the internet, writing code, viewing my calendar and joining a Zoom meeting.

Some repetitive tasks can take a lot of time, and optimizing them can free us up to do more important or fun things.

Using the computer should feel easy as we use it for so much of our time. It shouldn't feel exhausting.

4. Proficiency with our tools 🧰

To become a better developer I'd argue we need to be proficient with our tools. Just like a carpenter has a high proficiency with his.

Ricing is a useful Linux terminology you can use to google other people's setups.

A term applied to Japanese motorcycles and which later expanded to include Japanese cars. Riced out describes a badly customized sports compact car, usually with oversized or ill-matched exterior appointments

In programming though, ricing refers to the effort of customizing your *nix installation. From wallpapers, fonts and themes to window managers, terminal emulators and CLI utilities. 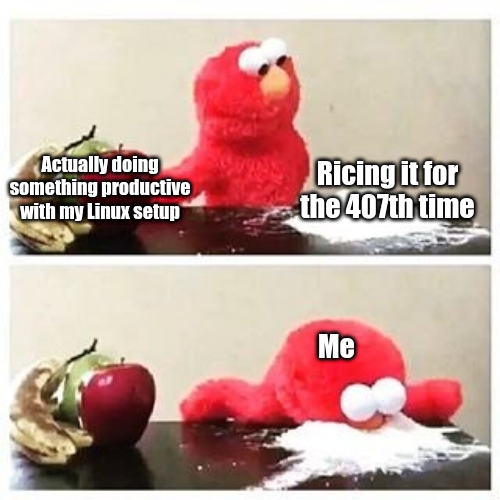 Feel free to explore more settings in this awesome site. 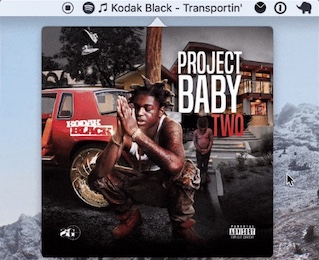 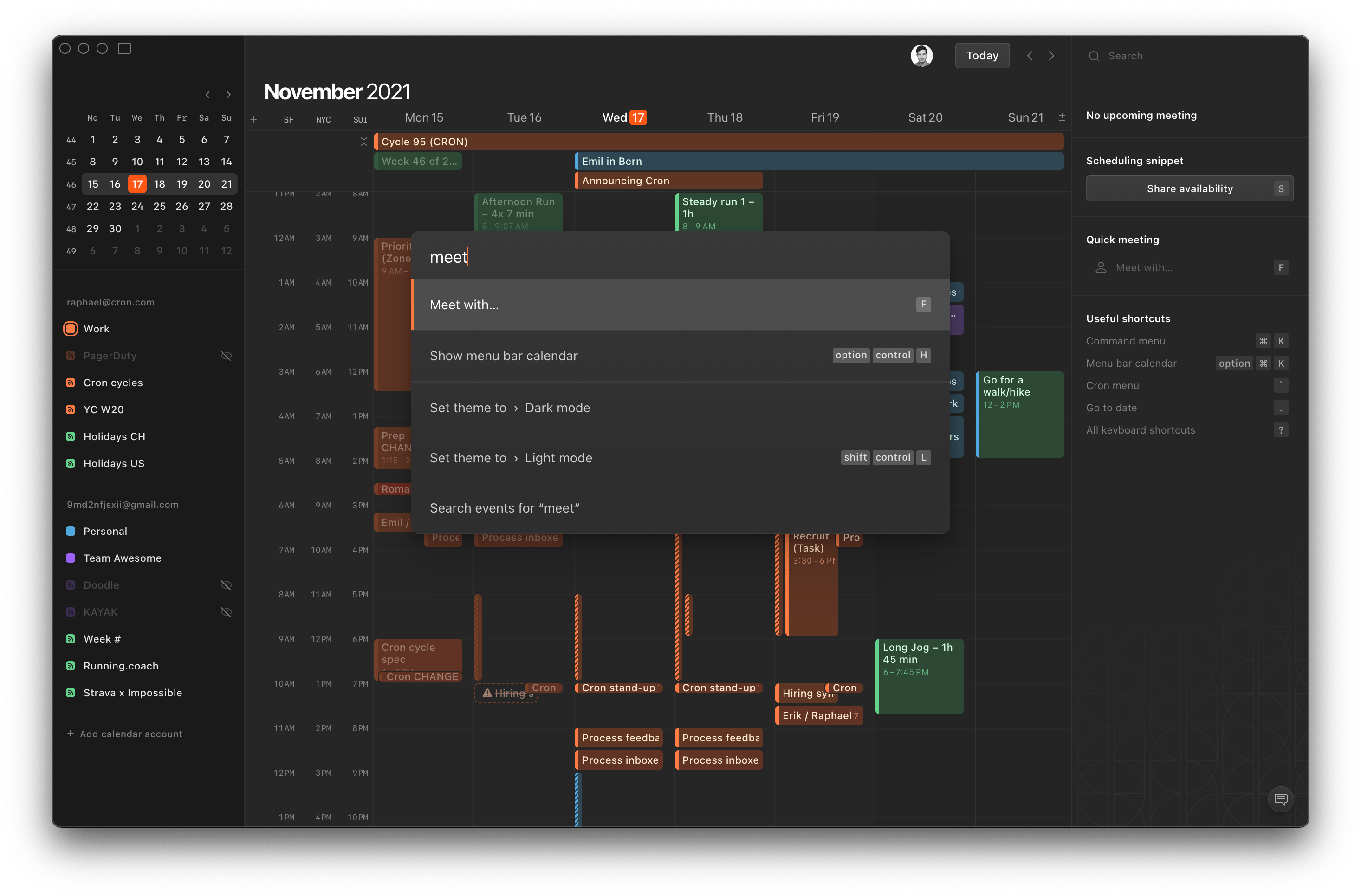 I hate clutter, it makes it difficult for me to keep my focus. The "floating" window management most operating systems come with cause windows to overlap, making it harder to easily see their content. They focus too much on the mouse for resizing and positioning windows - which is a big disadvantage to me.

For managing my windows I use Amethyst. Amethyst is a tiling window manager.

What's a tiling window manager you ask? According to wikipedia:

The border you can barely see in the GIF around the active window is from a Hammerspoon plugin.

For more details, check out this video by Brandon Boswell on tiling window managers for the Mac.

Launching apps is an every day task you want to feel intuitive and fast.

For this I use Raycast.

Raycast is a blazingly fast, totally extendable launcher. It lets you complete tasks, calculate, share common links, and much more.

Right now they are in an open preview, collecting feedback, so it's free! Try joining it, it's so worth it...

What I use it for:

Focusing on using the keyboard as much as possible really helped with my wrist pain and even a potential tennis elbow.

But if ergonomics aren't your thing, it's also a lot faster to use the keyboard than constantly moving your hand to the mouse.

Besides trying to learn keybindings for everything I use, I've also added global hotkeys for launching apps I use all the time.

O-launching / Hyper launching is where you assign single-key keyboard shortcuts to launch / switch to specific apps.
I use skhd for that. It takes so much mental overload compared to cmd-tabbing.

I use the ⌥+Some key keybinding. E.g, ⌥+S for slack, ⌥+I for my terminal (used to be iTerm) etc.

My config file, for example, contains:

You can also use Raycast's scripts to achieve that, or Karabiner Elements.

Other keyboard related apps I use

All done with the Mac, let's move into more programming related stuff.

For my terminal emulator I use Alacritty. It's main selling point is that it's GPU rendered. The reason I'm using it is that it's minimal and its settings are stored in a single .yaml file. I can easily back it up to my dotfiles repo.

For managing multiple terminal sessions I use tmux. It lets me easily switch between several programs in one terminal.

tmux's keybindings require you to first press a prefix key - which I use the ` key for.

For the shell I use zsh, most famous for it's plugin manager oh-my-zsh.

These are the ones I use:

Other shell-related goodies I use include:

For installing and updating apps, I mainly use brew. I created a Brewfile that lists everything I have installed with brew, so if I were to switch computers, I can easily re-install everything.

A lot of the apps we've seen can be installed with brew. So before downloading anything from the mac store / google, I first search if it exists in brew with: brew info <app name>

Here's an "Honorable mentions" list of some of my brew packages:

Why Neovim, you ask?

Interestingly enough, Neovim came in #1 🥇 in the Stackoverflow 2021 Developer Survey for the Most Loved Collaboration Tool!

I use a lot of plugins so here are some of them:

For a full list make sure to check out my dotfiles.

Note that I still use VSCode occasionally for debugging and solving complex git merge conflicts.

How do you get started with Neovim though?

For working with git I have the following git aliases:

I also use these tools extensively:

I have an alias to search my company's GitHub organization, but for security reasons I've replaced it with my own dlvhdr owner filter.

I also use the gh CLI tool with the following most frequent commands:

I use this tool to manage a stack of Pull Requests. Make sure to check them out here.

Graphite's command line tool helps you break up large engineering tasks into a series of small, incremental code changes, each of which can be tested, reviewed, and merged independently. This helps you stay unblocked as an author, and get faster, more thoughtful comments from your reviewers.

The following commands are the ones I use the most:

Hope I've made someone on the internet more productive.